The PC CADDIE team scoringallows you to quickly and easily determine the results for Pro-Am, League games, Casual games and Interclub tournaments.

If you want to carry out a team scoring with PC CADDIE, please first check whether you have the button Team scoring in the tournament input mask. Please contact PC CADDIE support if you don't have the module. Or select Team scoring in the opened tournament: 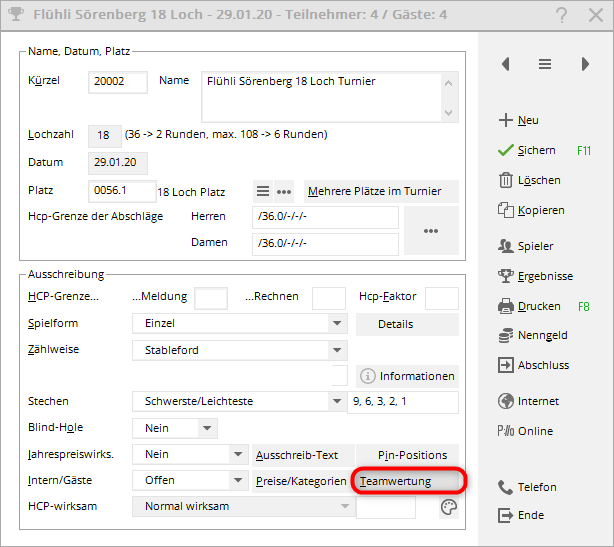 Upload the team scoring to Internet In most cases it is sufficient to use the two buttons Wizard and Print (F8) for the team scoring: Press Wizard.
A list of the pre-set team scores opens. At the end of the list, please pay particular attention to the settings that are determined over 2 rounds. These evaluations can only be used in multi-round tournaments. We are now continuing with “Standards”:

Select from the list the desired team scoring for your tournament. “Result” always refers to the entire 18-hole result, “Balls” always calculates the result per hole. If you confirm your selection with Sort, you will be taken directly to the queries Automatic team assignment and Special scoring (see the following sections). For the entries in which an “X” is contained, after confirmation you will be asked which value should be used for “X”:

If you wish, mark Stableford calculation for team results for example if in a Pro-Am the individual ranking is to be based on the stroke play, but the team ranking is Stableford.

If this option is not checked, the team ranking is done in the same counting way in which the entire tournament was configured. If the tournament is already set to Stableford, it makes no difference whether this option is marked or not!

After you have selected the desired team ranking, confirm your selection with Sort. A window opens allowing you to select the team composition. “Home club” is often used here, for example in league games or friendly games. “Keep teams” makes sense if you have previously put together the teams individually. Confirm the query with Yes. PC CADDIE now puts the teams together according to the selection.

You should now check the team composition in the list and, above all, look to see if there are any players “without team assignment” at the bottom of the list, golfers who couldn't be assigned automatically. If necessary, you can also assign these manually by selecting the player, clicking on “edit” and entering the team number.

If you change the start list, the players' club or other settings that can affect the team scoring, you should definitely repeat the assignment with the Wizard. It is advisable to always check the assignment again before the first printout of a team results list, so that everything is correct for the award ceremony.

After the assignment has been made, you can press Print (F8) to start the scoring. You can choose beforehand whether you want to print net or gross: Other options for team evaluation

In most cases, the normal procedure described above is sufficient. In the following section we describe the further possibilities for team scoring, which also make very special evaluations possible. 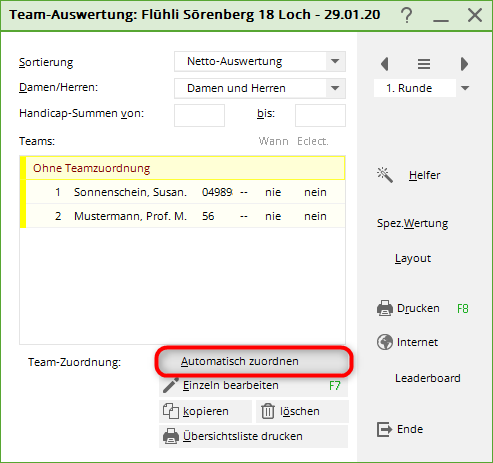 First, it is determined when and how the individual players in the team should be scored. This information can be given separately for the first four players in a team. You decide later in which order to proceed (see below). The fifth and each additional team member is assigned the setting from the fourth player.

When? determines whether and when the player is scored. There are three options:

Under How? you determine how the player should be included in the rating. Either the result of the individual team members can be summed up to a total (“summarize”) or the overall result is determined as an eclectic result (“eclectic”). Combinations are also possible here.

In a Pro-Am tournament, players B, C and D belong together and form a team with the Pro. The joint result of players B, C, D should be determined as the eclectic of the two best balls of this team (e.g. the two best are B and C, the results are compared and thus the eclectic result is determined, player D is disregarded). To get the common team result, the pro should now be added. For such a configuration, the easiest way to set up using the “wizard” is to select “Pro-AM: Pro + 2 best amateur balls”.

You can see this setting again after the assignment via the wizard under “Automatic combination”. Players in a team sets how many players of the team should be rated.

The Selection of the team members takes place here according to the “handicaps”. As a result, the Pro (or best HCP in the game) is always rated, even if it is a woman and doesn't start as 1st. If the selection is in the start order, the results are always counted in this order.

The Combination (which players are a team?) is “Keep team” in our example. After the automatic team assignment, you should print an overview list for checking.

Automatically assigned team members can be modified with the function Edit single (F7) in their team ranking. To do this, mark the player you want to edit.

Using the button Edit single (F7) allows you to assign or remove individual players to/from a team. The type of rating can also be configured. PC CADDIE differentiates whether you select Edit single (F7) while a player is selected in the list, or while the team name is highlighted.

If the selection is on a team name as above, the following dialog appears; the settings apply to the entire team (all players in the team). You can also change the team name individually, for example rename to “Team Porsche”.

Each team must have its own Team-ID. This number is used to assign the players to the team. If you set this number to “0”, the players will be removed from the team ranking.

If you have selected a player in the list and then select Edit single (F7), this dialog appears: If here the Team name or the Tie position changes, the changes affect the entire team.

Team-ID, Scoring and Sum/Eclectic only refer to the activated player. By changing the team number you can easily assign the player to another team.

For information on Tie position is available here: Tie

Just as you can assign a player to a team individually, you can also change a team name.
Mark the line with the team name and select “Edit”.

No Return (NR) and disqualification (DQ) in the team scoring

If you assign No Return (NR) or Disqualification (DQ) to only one team player, the entire team will consistently drop out of the ranking.

The opposite: If the rest of the team is allowed to count for the scoring, set never score for the single player in the team scoring.

This is how you can do it:
Go directly to the tournament data entry and select the button Team score in the lower right. In the team window, select the player and click on Edit single (F7). Set Scoring to “never” and confirm with OK. 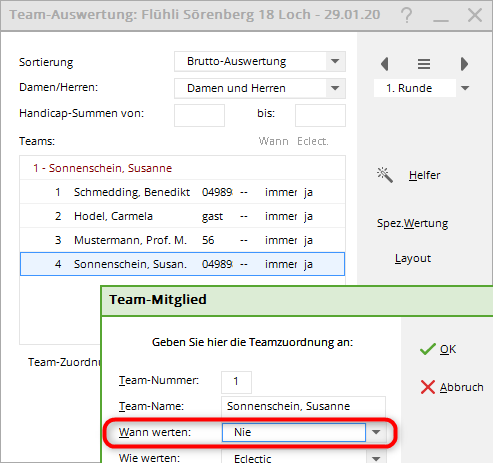 This is how you ensure that the team will still be scored. Then make sure that the number of results is still available for the scoring that is required in the tender.

Not enough results for the team

The scoring for a team is usually determined via CR or via par. If you have fewer results for a team than are in the advertisement, a team would have fewer strokes over CR than with one additional player, and would therefore be high in the ranking. Think about whether you want to take the team out of the rating or whether you add a “dummy player” with the name: “Player, missing” into the tournament and into the team, and only enter “blind results” for this player.

Copy team assignment from another round For tournaments over several rounds, the team assignment can be copied from another round by clicking Copy.

Teams can also be assigned according to the first letter from the start list, or the gender of the players. The prioritization is particularly useful if people without uniform characteristics are to be grouped together. To do this, enter a character of your choice when entering the player in the start list editor - behind the person, on the far right (under Prior.). You would assign an “A” to all players of Team A, a “B” for Team B, etc.

In order for your teams to be put together according to their priority, select the item “Priority” when you create the team: 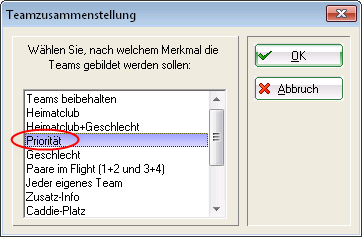 Click Delete if you want to delete the entire team assignment. And confirm your selection in the next window with Yes, delete:. 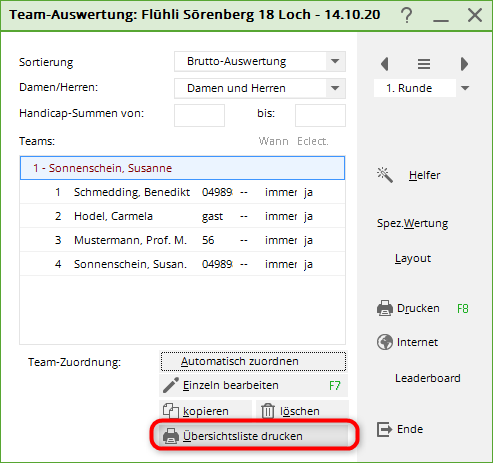 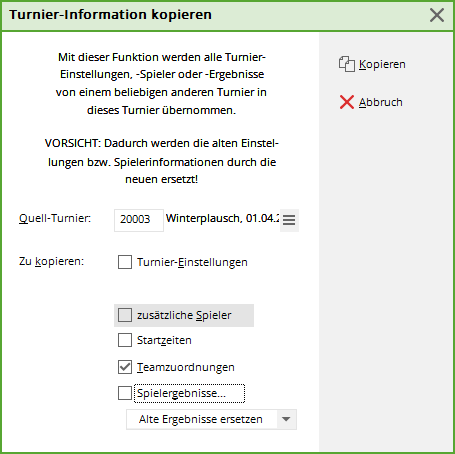 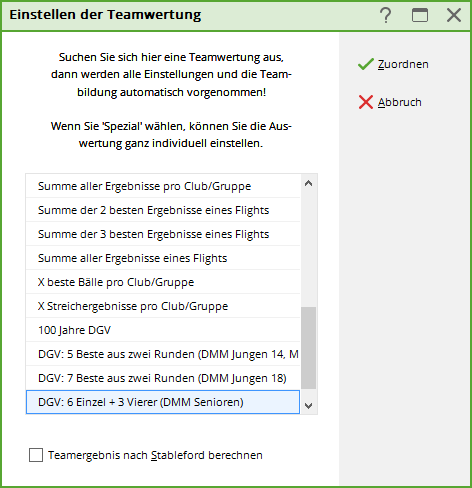